Realized I never posted up my thoughts about my second day at OwlCon. I only attended a single 4 hour session on Sunday as I needed to get home to take part in the weekly rituals of laundry and house cleaning. The session I attended though was well worth it, and I was almost tempted to stay around for a second 4 hours (they ran the session twice back to back).

The game I played is called Song of Drums and Shakos. This is a skirmish miniatures game set during the Napoleonic era. The rules are based on the game Song of Blades and Heroes, and both are published by Ganesha Games. These rule sets are awesome for two reasons: 1) they are cheap at $8 for the PDF and 2) they allow the use of any miniatures you want. Song of Blades and Heroes is a fantasy based game and works well with pretty much any fantasy figures you might have from Games Workshop, Reaper, WoTC you name it. Song of Drums works equally as well with Napoleonic miniatures from a variety of manufacturers. Both games work well in 15mm and 25mm scales. 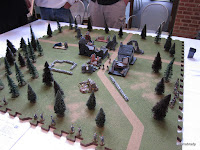 The scenario for the con was a group of British riflemen had retreated to a position in a burnt out village. A group of french infantry and dragoons followed and prepared to engage. I played on the side of the french with two others. I took up the center, and control of our sides commander. I did not play him well. The game did last most of the 4 hours we were scheduled, and it was very bloody. In the end, the loses suffered by the French were too great and we had to retreat. Throughout the game I tried to kill one single rifleman who had climbed up into a building. In hindsight I should have gone around one of the building and left him there, but I didn't. I shot at him almost every turn during the game and didn't manage to hit him once. I think he killed 3 of my guys including the commander. He was basically superman, and it drove me crazy that I could not take him out. There had actually been two guys in the building, but the first one I was ale to kill in one or two shots. Of course, it is this unpredictability that makes this game so much fun.

As I played I was reminded of everything I liked about this game system. The games actually play quite fast compared to something like Warhammer or 40K. The rules are easy enough to teach to someone in a 5 minute overview and new players are comfortable with the game after one or two rounds of playing. There is enough depth to the rules to allow good tactics to impact the outcome, and enough luck of the dice to make sure that the game cannot be gamed. Best of all this game is about combat, and it is bloody. Once combat starts it can be over very fast. The games is deadly, and that's how it should be.

One thing I will say for OwlCon this year is that all of the people I gamed with were awesome. In years past I have always seemed to find at least one player who wanted to argue rules or otherwise generally be unpleasant. Not so this year. The wide variety of gamers is what makes a convention like OwlCon great, and this year I got to game with the cream of the crop.

If you want to read more about the game at OwlCon check out the write up on the Tactical Miniatures Gaming blog. There are some additional pictures of the game in my OwlCon album on Picasa.

Posted by sabr @ 10:16 PM
Email ThisBlogThis!Share to TwitterShare to FacebookShare to Pinterest
in games and gaming