The 3rd edition of Warhammer Fantasy Roleplay is not your typical RPG. It is not just an assortment of books, instead it comes with cards, markers, card board stand ups, and more. No question, the game has a lot of bits. The recent release of the hard cover books for the game has given me the opportunity to reorganize all of the bits for the game in a way that I think will be far more useful. Prior to the release of the Players Guide, I had my cards for the game arranged in binders for easy scanning. Since the players guide has the text of all of the cards printed in the book I have decided to remove the cards from the binders and shrink my storage back into the core set boxes. I currently own 2 core sets and one of each of the expansions. I did not buy the GM or players vaults though. I keep the books on a shelf next to the components, but everything else fits in the two core set boxes and a home made tray. I have plenty of expansion room for the foreseeable future.

I thought I would walk through my storage setup for the game, and describe a bit about why I am doing it the way I am.

GM's Tray
I picked up a nice wooden silverware tray on sale at Target one day thinking it would be a good way to organize the cards, dice and other bits needed while I was running a game. Turns out I was right, it is perfect. I used a bit of foam core to create some extra dividers, and some spare index cards to create some labels. The tray has all of my wound, miscast, insanity and condition cards available at my finger tips. I also have 4 sections divided up for dice storage. Some extra containers near the back store counters and stance trackers. I also have all of my mutation, talent, focus and reputation cards stored in this tray. This is a nice way to keep things organized, especially if you do not need to travel with the game. 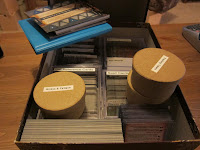 This box containers the majority of the cards needed for game play. With the release of the books and the "lite" character sheet I have decided to store my cards unsleeved. I have sleeves for use in game as needed, but storing thim this way is much easier for me. I have four large plastic boxes which store 1) Action Cards, 2) DM Reference Cards (including from the Creature Vault), 3) Spell Cards amd 4) Blessing cards. They fit well with plenty of room for expansions. I have three small paper boxes for use on the table which contain stress/fatigue tokens, tracking tokens & corruption tokens. The box is rounded out with all of the large party and career type cards. I have not gotten them all organized yet, but will be using some 4x6 photo albums to keep them in good shape. 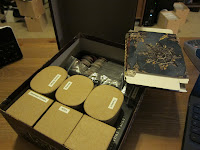 This box holds the rest of the game components. I have divided up the various monster, npc and pc standups into trays and boxes by types. This works well for monsters as I have them divided up by type and can quickly find undead or chaos or whatever I need. I also have the adventure specific components divided up into plastic bags.

While I was at Michael's grabbing some of the stuff used to organize all of the bits I picked up a new tray with some felt and paint and built a dice tray for use with Warhammer. I chose a purple color that looked a lot more Tzeentch'y before I painted it on, but I think it still looks nice. Cannot beat the $2 I spent for it though.

I recorded a short video overview of the setup as well to give you a closer look at how it is all organized (mostly to try out my new camera).

Posted by sabr @ 6:32 AM
Email ThisBlogThis!Share to TwitterShare to FacebookShare to Pinterest
in games and gaming, warhammer fantasy