Iain loves playing games.  Candyland, Chutes and Ladders, Chicken Cha Cha Cha to name a few.  Even better though is the chance to play with some of dad's games.  Recently, he has been very interested in the miniatures and tiles I have for playing Dungeons & Dragons.  He sees me setting them up for game night, and sees us playing with them and thinks that he should be able to as well.  He has loved rolling dice since he was tiny (so tiny that he should have been no where near dice) and that makes the RPG all that much more interesting. 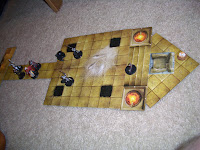 Recently, a set of rules were published on the Newbiedm blog for playing an rpg like game with kids.  The idea was exactly the situation I was seeing with Iain.  I downloaded the rules and we had the chance to try them out a few times.  Iain really likes it.  Basically, I dump out my miniatures on the floor and let him pick four guys he likes.  I set up some tiles and makeup a bit of a story to go along.  He has always been a fan of making up stories, and this is one of his favorite parts of playing. 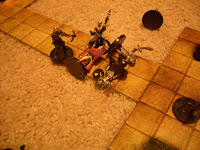 Last time we played he had the chance to explore the mummies tomb and fight off the mummy kings skeleton guards and pet spider.  His goal was to defeat the mummy king and collect the treasure, he was successful. The game is very simple, combats involve dicing with d12's with the higher number winning.  There are a couple of simple modifiers which can cause a bit of trouble though.  Each fighter/monster in the game has two wounds, and after they have taken one wound take a -1 penalty on their rolls.  This modifier is difficult for him to understand (perhaps because there is nothing visual to denote it).  The other modifier, a +2 for having an extra friendly attacker in contact with the same enemy, is much easier for him to grasp.  We are working on it though, and he is getting better.

We roll dice, and use our fingers to determine the totals with modifiers.  He has to determine which roll is higher, and he loves this part...when his is higher.  He is a good sport though, and has never complained when one of his party members goes down.  It is a very fast game to play, which makes it ideal for a four year old. 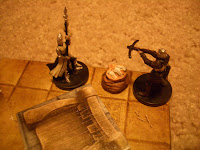 We have played three times, and he has won two of the games.  Typically the victory is enough for him, but in the last game when he found the treasure it turned out to be 45 cents for his piggy bank.  You cannot go wrong with real treasure right?

If you have young kids, kids to young to play the real games with, I highly recommend you try out this simple set of rules.  They work great with D&D miniatures and the D&D tiles as well.  Even if you don't have the tiles, any grid surface will work.  The movement for the game is set base on squares which makes it very easy to count.  The is a great way to teach kids simple arithmetic, and does a great job of teaching how to understand and follow rules.  If you give the game a try be sure to let me and the NewbieDM know how it goes.

I tried to get Iain to record a video with me to talk about playing the game, but he decided to watch They Might Be Giants

instead.
Posted by sabr @ 10:09 PM
Email ThisBlogThis!Share to TwitterShare to FacebookShare to Pinterest
in games and gaming