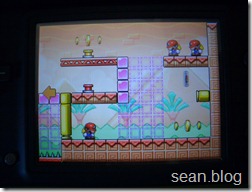 I downloaded the new Mario vs. Donkey Kong: Minis March Again! from the DSi Ware store a couple days back and have been playing the game.  I had not played, or even heard of, the similar titles that came before this one.  The game is basically a puzzle game, you have a bunch of wind up mini Mario’s that you need to get through the level, a room, before time runs out.  You need to open doors, collect coins, kill or avoid bad guys, and lots of other typical Mario type things.

The game is fun, and can be a bit challenging.  Once you reach the end of a level you need to defeat Donkey Kong by shooting mini Marios at him.  I am finding these to be the most difficult part, and I guess that’s why the reserve these for the boss challenge.  :)  It would be a little bit better game if it made use of both screens for game play.  That is my only issue thus far.

You can build, share and download levels over WiFi Connect which is a pretty cool way to keep the game fresh.  I think the game is well worth the 800 points I paid for it, especially since I was able to just snag it while laying in bed one night.

Posted by sabr @ 11:40 AM
Email ThisBlogThis!Share to TwitterShare to FacebookShare to Pinterest
in games and gaming