At long last I finally DM'd my first game of 4th Edition Dungeons and Dragons on Thursday evening. We played from about 6:30 - 9:30 and managed to make it through a rather lengthy introduction to the setting and campaign, a player introduction, a bit of travel AND one combat encounter. I received some really amazing comments after the game and think all the players really had fun. We are currently a group of 4 players with a 5th in the wings for next session.

The campaign is set in the kingdom of Treayal. Treayal is a peaceful land with less than peaceful neighbors. Orcs, goblins, tieflings, and hobgoblins attack from the east, engaging in a war that has lasted almost 20 years. Much of the land has been spared the horrors of war and the people have gone on with their daily lives, but recent happenings on the western border may signal an end to the long standing peace. King Phillip is stretched thin, and recruits our heroes to investigate the troubles in the west. 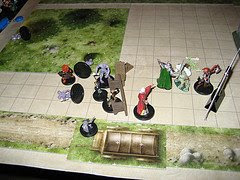 The players accepted the request of the king and set out on their quest. The journey across Treayal is a long one, but the roads are well kept and safe. The journey was not without trouble though, on the morning of the 9th day the players coach stopped at the sounds of a young girls screams. On the heels of her screams was a guttural growl from the family cemetery of the farm the girl had run from. Three creatures covered in blood and dirt moved toward the girl and the party. The party did not see the the four other creatures hiding in the trees. The farmers had a small table alongside the road where they often sell fresh vegetables to travelers. The party made good use of the table by pushing it over for some cover. I had an idea in mind to have a fairly lengthy combat for the first game. I went with 9 level 2 minions, and level 6 monster. The battle proved challenging to the party (the encounter builder showed it as hard), but not insurmountable. The party was facing a Stench Ghoul, which turns out to be quite a challenging monster to hit. His aura 2 stench ability basically negates the combat advantage bonus and that made it difficult for some PC's to hit his 23 AC. In retrospect this was a little mean, but I didn't fully understand the ramifications. I will say this, once we got into the flow of things we were moving through the combat quite quickly. We didn't have many moves in combat, but the Ghoul did immobilize and daze a few characters.

The characters were able to defeat the ghouls in the end, and save most of the family of the little girl (her eldest brother was killed). The father of the family, somewhat in a daze, let the PC's know that attacks by the ghouls have happened before, but it is usually just a single creature. They are also very infrequent. They must have been driven out of their lair north of the farm en masse. The ghouls come from the ruins of a small village, destroyed by fire many years past.

I have skill challenges, more roleplaying opportunities and of course more combats on deck for the upcoming sessions. All of us are new to 4e, so we will be progressing together. You can find out more about the campaign and the History of Treayal on our campaign site.

Posted by sabr @ 4:00 PM
Email ThisBlogThis!Share to TwitterShare to FacebookShare to Pinterest
in games and gaming