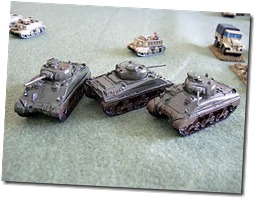 I have been reading through some of my Flames of War books recently, mostly due to the recent launch of the new Flames of War Command blog.  I am sure there are loads of great Flames of War blogs out there, but this blog is run by the same person who writes the AT-43 Addict blog which I like quite a lot.

Anyway, it got me thinking about FoW again, and possibly putting together a late war US Tank Company.  I have never played the game, but have always wanted to, so I did some asking around on the FoW forums and came up with an army that sounds pretty fun to me.

Pretty cool.  I would have 20 tanks in the army, along with 4 half tracks.   That is a lot of painting and assembling, but I am never too concerned about winning any painting awards.  The tanks are basically all one color so I think I could hammer them out pretty quick.

The army above would run me about $240.00 at the War Store.  That’s a lot of money for a game I will likely only play a few times.  Can’t decide what to do.