I have bought quite a few D&D miniatures since the game has been released.  I played once or twice, but I never really liked the skirmish game that much.  The miniatures, especially the monsters, are quite nice though. 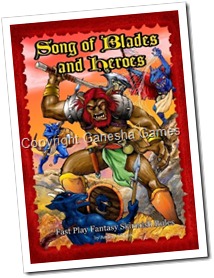 Having such a large collection of miniatures, made me realize that I needed a miniatures rule set that would play well with these and any other fantasy miniatures I have lying around.  They are good for RPG’s, but I just don’t get to roleplay all that often.  Enter Song of Blades and Heroes.  I purchased this game about a year ago for the amazing price of only $5.00.  Your 5 bucks gets you a PDF file with the game rules, campaign system, and unit lists that you need to start playing.

This game does a couple of things very well.  First, you can use any miniatures you want with the game.  If you count the core game and all of the currently available expansions you end up with unit lists for just about anything in the fantasy genre.  Second, the game plays fast.  Once you get a handle on the rules you can play through a game in about 30 minutes. Finally, you can play the game on a small table.  Depending on the scale of your miniatures you can play on a 2x2 or 3x3 table.  I made a 3’ x 2’ setup that I think might work ok for smaller games at 25mm.

I mentioned expansions, and there are currently three that expand the bases game.  Song of Gold and Darkness is all about playing in dungeon environments, Song of Wind and Water is about playing outdoors, and Song of Arthur and Merlin (which I don’t own yet) adds the Arthurian legends to the game.  Each expansion adds new abilities and includes new unit lists in addition to the new game rules and settings.

I have made a few armies using a combination of the rules in the books and the rules for creating custom units.  Unit creation is made much easier thanks to Ray Forsythe’s Warband Builder.  This java based web application makes creating warbands for the game a snap.  Either copy the stats directly from a rulebook, or make up your own and it will figure the unit and warband cost for you.  You can grab the warband builder on the Song of Blades Yahoo group as well as discuss the game with other fans (and the games designer).  I have created a warband with a cat theme using the Rakshasa, Catfolk, Dire Lion, Blessed Hunter, 2x Hunting Cougar, and Manticore models from DDM.  You can play themed warbands or just grab a handful of your favorite models and stat them up.  I am rebasing some of my old Mage Knight Dungeons miniatures for the game.

This is a game that I really want to play more of.  To be honest, I have only played a few solo runs of the game, so I really want to get some in against a real opponent.  One last thing to mention is that the games publisher Andrea Sfiligoi also writes a ezine called Free Hack to support his games.  The magazine covers all of the games I mentioned above as well as the Mutants and Death Ray Guns game which is a science-fantasy game and Song of Drums and Shakos which is a Napoleonic skirmish game.

Google Tags: song of blades and heroes, miniatures, fantasy
Posted by sabr @ 10:26 AM
Email ThisBlogThis!Share to TwitterShare to FacebookShare to Pinterest
in games and gaming